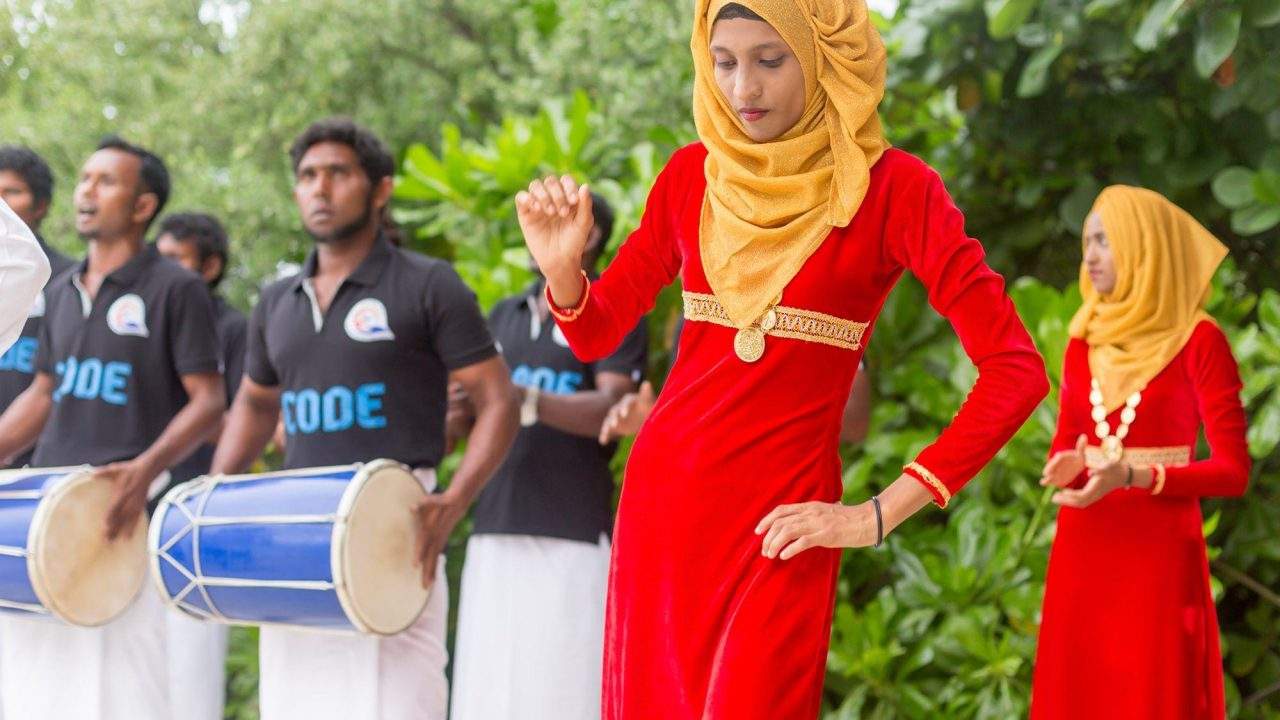 The customs and social behavior of the Maldivians have been greatly influenced by the Indians, Sri Lankans, Arabs and North Africans who visited the Maldives while traversing through the trading routes of the central Indian Ocean. The Maldivian culture is rich and vibrant due to the infusion of various other cultural elements.

Though Maldives was culturally influenced by other traditions, Maldivians have built and preserved an exclusive cultural identity.

Maldivians inherited a treasure trunk of ancient mythology and folklore that was passed orally through generations. These myths cover fascinating stories on various aspects of island life. Since the islands are surrounded by sea, most folktales depict fearful sea demons and spirits that haunt the islanders.

Traditionally the island communities were very close-knit. This togetherness is still prevailing in the small island societies. Accordingly men will be mainly engaged in fishery, carpentry and toddy tapping. Women were mainly engaged in household duties and raising families. Certain rituals and practices were followed in the islands on special occasions like weddings. Some of these rituals survive to this day. The advent of tourism in the 1970’s accelerated the modernization process of the country. Today an increasing number of women hold crucial positions within the public and private sector. As a result of economic growth, dramatic lifestyle changes were introduced.

The Maldives boasts of a rich culture of music and dance. Some of the cultural music and dances can trace their roots to distant continents. Resort islands organize cultural performances to entertain their guests regularly during which you can observe islanders performing traditional music and dance items. One of the most famous Maldivian cultural displays which involve singing and dancing is called the “Bodu Beru”. The Bodu Beru performers, numbering around 20 will be wearing traditional garb of sarongs and white sleeved shirts. Bodu Beru performance is guaranteed to make you sway along with the drumbeats. Other traditional music and dance items include; Dhandi Jehun, Langiri, Thaara and Gaa Odi Lava. Most of these items involve rhythmic music and dances using various cultural props. There are some cultural routines exclusively performed by Maldivian women. Bandiyaa jehun, Maafathi Neshun and Bolimalaafath Neshun. Some of these acts were designed to perform in the royal courts. Indian and Western music have also greatly influenced the musicians of the country. Frequently resorts host performances of local bands to enliven their guests.

Maldivians are known for being avid craftsmen. The intricate stone carvings found in the Friday Mosque in Male’ is a living example of Maldivian craftsmanship. The mastery and inventiveness of Maldivians can be seen in lacquer works, mat weaving, coir rope making and calligraphy. Traditional dresses and ornaments profess the artistry and creativeness of Maldivian artisans. Such exceptional works can be acquired by visitors as souvenirs. A visit to the Maldives not only guarantees the best vacation of your lifetime, but it also gives you exposure to a great cultural experience.