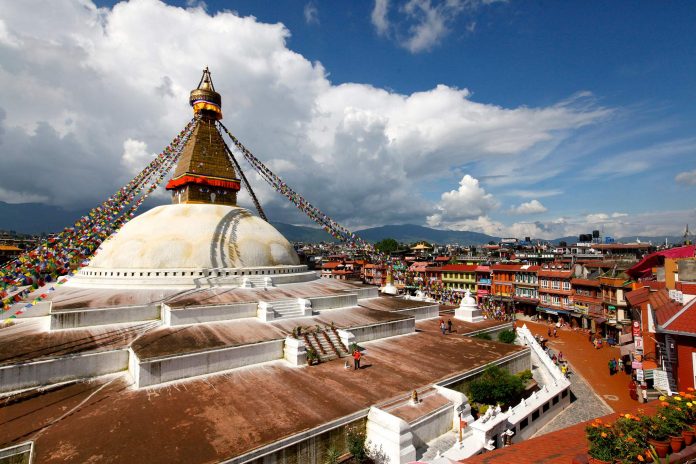 Nepal, officially the Federal Democratic Republic of Nepal, is a landlocked country in South Asia and is the world’s youngest republic. It is bordered to the north by the People’s Republic of China, and to the south, east, and west by the Republic of India. With an area of 147,181 square kilometers and a population of approximately 30 million, Nepal is the world’s 93rd largest country by land mass and the 41st most populous country. Kathmandu is the nation’s capital and the country’s largest metropolitan city.

Nepal is a country of highly diverse and rich geography, culture, and religions. The mountainous north contains eight of the world’s ten highest mountains, including the highest, Mount Everest. The fertile and humid south is heavily urbanized. By some measures, Hinduism is practiced by a greater majority of people in Nepal than in any other nation. A minority faith in the country, Buddhism is linked historically with Nepal as the birthplace of Siddhartha Gautama who, as the Gautam Buddha, gave birth to the Buddhist tradition.

Nepal had been a monarchy throughout most of its history. Prithivi Narayan Shah, a Shah dynasty king, unified the many small kingdoms in 1768. Since then, the country had been ruled by a dynasty of kings. However, a decade-long People’s Revolution by the Communist Party of Nepal (Maoist) along with several weeks of mass protests by all major political parties of Nepal in 2006, culminated in a peace accord and the ensuing elections for the constituent assembly voted overwhelmingly in favor of the abdication of the last Nepali monarch Gyanendra Shah and the establishment of a federal democratic republic in May 28, 2008. The first President of Nepal, Dr. Ram Baran Yadav was sworn in on 23 July, 2008.