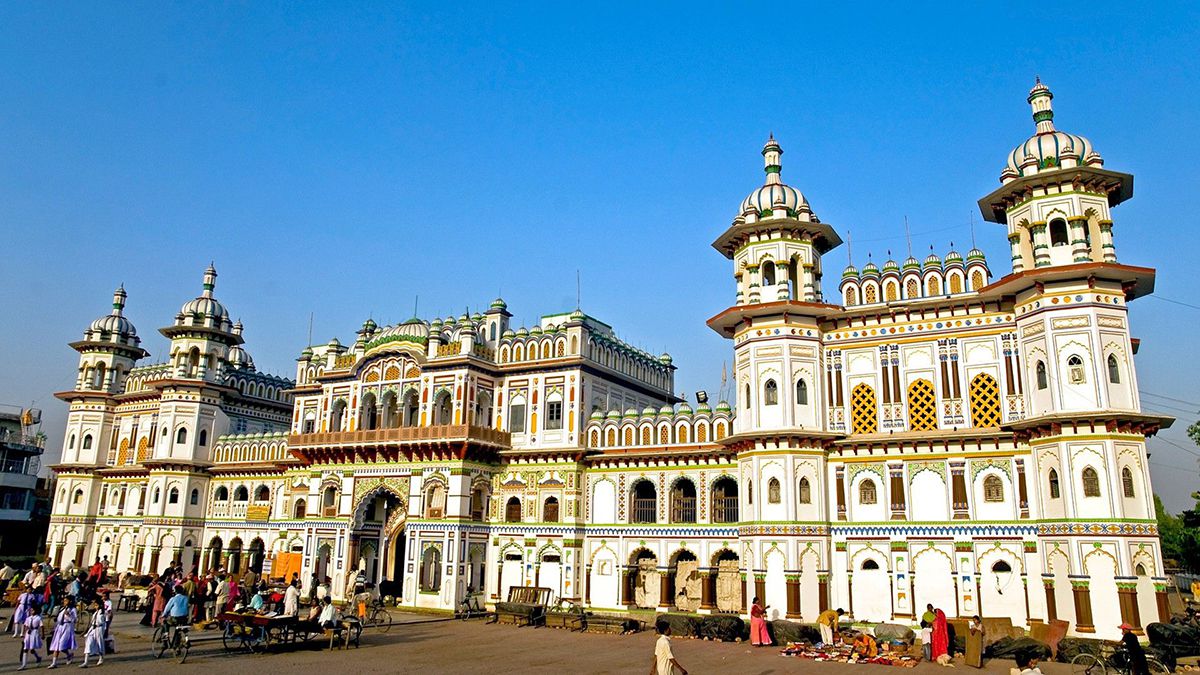 Nepal’s Province Two is the only province with all its districts located in the southern plains of the country known as the Terai. The geographical belt of this province is considered to be the northern part of ancient Mithila cultural of the India Sub Continent. The eight districts that make up the province are largely flat and very fertile with many rivers that flow through its landscape depositing rich silt necessary for agriculture productivity.  In addition to Nepali, Maithali is predominantly the language widely used by people in this region who are largely Hindus.

Janakpurdham: This ancient city was considered to be the capital of the Videha dynasty that ruled Mithila region in the 18th century. Its references and the birthplace of Sita (Janaki) are mentioned in the Hindu Epic Ramayana. This place is therefore an important center for its prolific Mithila history and culture. Another important town here is Dhanushadham where Lord Ram is said to have won a challenge only after which he was given permission to marry Sita. The city is an important pilgrimage site for Hindus the world over and is recognized as a center for religious and cultural tourism.

Janaki temple: Located at the heart of the city is the impressive and dominant Janaki temple which was built around 1898 by queen Brisabhanu. The temple which is the main attraction in the city is also known as the Nau Lakha Mandir (nine hundred thousand rupees) which in literal terms translates to the cost of building the temple. The temple rests at the site where a holy saint is said to have found a golden idol of Sita, believing this is where she was born. The temple is one of the biggest in Nepal. Adjacent to the Janaki temple is the Ram-Sita Bivaha Mandir, where Lord Ram and Sita are said to have been married.

Mithila painting: This form of paining has a history that dates back to the time of the epic Ramayan and continues to be practiced even today in Nepal and India. Also known as Mithila art, its origin in Mithila cultures is said to have started with the capture of the wedding ceremony of Lord Ram and Sita. This art form is usually practiced by women who decorate walls and floors of homes during festivals and auspicious ceremonies. The paintings reflect natural elements, abstract geometric patterns and village life using natural dyes such as sooth, charcoal, turmeric, sandalwood and indigo. Painting are stroked with twigs and fingers and symbolize prosperity, heroism, love, devotion and fertility.

Sacred Ponds: Known as a town for its ponds (Kundas), there are more than 200 sacred ponds revered by pilgrims for holy rituals and cleansing. The more famous ones are Dhanush Sagar and Ganga Sagar which are in close proximity to Janakpur.

Events to observe:  Chhath an ancient Hindu Vedic festival observed on Kartik Shukla Shashthi and dedicated to the sun god (October or November) is celebrated in a carnival like atmosphere. Likewise Bivaha Panchami marking the wedding of Lord Ram and Sita is also marked with religious fanfare, and Holi the festival of colors marks the advent of spring.

How to reach: There are many airlines that operate direct flights from Kathmandu to Janakpur. Long distance buses both night and day services operate to the city from major hubs in the country.

Parsa wildlife Reserve: Spread over Parsa, Makhwanpur and Chitwan districts this reserve is home to some endangered animals. Located adjacent to the Chitwan National Park, Parsa Wildlife Reserve has recently been opened to the public.

The reserve is a national wildlife park in its own right with attractions to see tigers, leopards, rhinoceros, wild elephants, sambar, chital, hog and barking deer as well as Langur monkeys and striped hyenas. There are about 300 species of birds found in the reserve; common ones include the giant hornbill, peafowl, red jungle fowl, flycatchers and woodpeckers.

How to reach:  Located between Nepal’s two industrial and business centers Hetauda and Birgung, it is accessible from any place in the country. The closest airport are Bharatpur airport in Chitwan and Simara airport in Birgunj.

Salhesh Botanical garden (Phulbari): The botanical garden has a legend, intertwined with faith and commitment of Salhesh, the hero of the once untouchable caste in the Mithila region of Nepal. As a cult hero, this place represents his legacy and commitment as a change agent for the downtrodden. The botanical garden is very unique with a single garland shape orchid flowering from the branches of two tree. The blooming of the orchid is distinctive in that it only flowers once a year and that too on 1st Baisakh, the start of the Nepali New Year. Thousands of visitors from Nepal and India come to this garden to witness this nature’s wonder.  Spread over 8 hectares, the garden is rich in plant diversity and has a good repository of tree species, ponds and walking trails.

Public transport is available to the destination which is 3 KM west from Lahan town in Siraha district.

Gadhji Mai:  This pilgrimage site is one amongst the many seats of power (Shakti Peeth) dedicated Hindu Goddess. The temple in Mahagadimai Municipality in Bara district is famous for holding a religious fair (mela) once every five years with large numbers of animals being sacrificed. The month long mela starts on Magh Sukla Saptami (December January). Thousands of people from Nepal and India visit the temple in the belief that Goddess Gadhi Mai will fulfill her devotee’s aspirations when offerings are made at the temple.

The closest airport is Janakpur and there are public transport to the area from all major towns and cities.

Jaleswor Mahadev:  Devoted to Lord Shiva, Jaleswor Mahadev is a revered religious site for Hindus. The town of Jaleswor is synonymous with the Mahadev temple where Lord Shiva’s 20 ft. symbol the linga is always submerged in water. There are two large ponds Barunsar and Kshiresar one on each side of the temple which feed water into the temple. Large numbers of pilgrims visit the temple in the month of Shrawan (July-August) that is especially devoted to Lord Shiva and Goddess Parvati.

Access: Jaleswor is 15 km south of Janakpur and the town center is connected to the Mahendra Highway.

Birgunj: The metropolitan city is synonymous with Nepal’s trade and transit and is a commercial hub south of the capital Kathmandu. Being a border town and also known as the “Gate way to Nepal”, Birgunj was founded in 1897 by 3rd Rana Prime Minister Bir Shamsher Jang Bahadur Rana. Aside from commercial interest, key areas of attraction in Birgunj are Ghadiarwa Pokhari, Birta Mai Temple and the Gahawa Mai Temple which has references to Birgunj’s former name Gahawa.

Simraungadh: Simraungadh in Saptari district was once a fortified city and an ancient capital of Mithila from 11th to the early 14th century. This historical background makes it a cultural, archeological and historical site of interest and importance. A key attraction in Simraungadh is the Kankalini Temple (Shakti Peeth) which is a seat of power for Hindu Goddess. The temple is a key attraction for Nepali and Indian Pilgrims